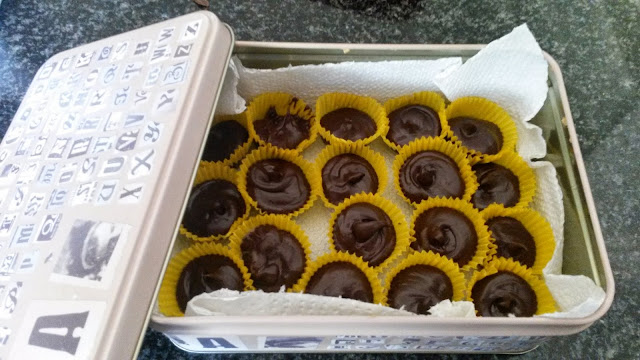 I've been trying to find a few nice recipes for something sweet and satisfying to have while banting. There are a lot of recipes out there for fat bombs, but I've got a few problems with them.
I've tried out a few recipes. The chocolate ones have been too dark and bitter; the lemon ones don't taste of anything but butter (I guess that's why they use so much coconut oil). The choc fudge ones wouldn't set. I am still experimenting but here's the first batch I thought wasn't too bad. In fact, they were finally good enough to give as a gift to some fellow banters. If you are using Stevia or some sort of liquid sweetener, you can skip the melting phase. It's just to dissolve the xylitol granules I use so they aren't crunchy in the truffles.

To set your truffles, there are a number of options.
May I suggest spooning the finished mixture into a piping bag or zip seal bag with a small corner cut off, and piping it into your container(s). It isn't runny enough to pour, and using a spoon will get messy. You can see the swirls in the picture where I piped mine into my papers; maybe next time I'll keep the tip still so they don't look so much like... well, you know.

I think you could reduce the cocoa a bit, they still taste quite dark; I want to keep trying to perfect the recipe. It's a tough life :)

Welcome to Moonica's Meals, a place for me to keep track of the low carb meals that have really worked for myself and my family.


A low carb lifestyle has had an immensely positive - even transformative - effect on my health and my life. I have lost weight; my cholesterol, blood sugar and insulin levels have normalised after a lifetime of insulin resistance; my skin looks better; I feel great. It's even transformed my relationship with food (from binge/diet cycles and comfort eating to truly enjoying food).

I hope you find some inspiration in these pages for dinner, for a treat, or to find out more about low carb eating.